LONG WALK HOME
CLICK THIS LINK TO SEE WHAT THE WALKERS ARE DOING THE LAST TIME THEY HAD INTERNET SERVICE and to see updates
Just finished Johnnie Bob's Mother's Day Walk @YuccaMt./NevadaTestSite. It had been my intention & also at least 2 others I'd spoken with to join LW5.3 upon completing WesternShoshone Walk, We heard the LW5.3 got dropped & they drove to D.C. declaring it officially over.

This has NEVER happened before!.... (not even in 2008 when Dennis dismissed 27 people for smoking pot.) My 2nd nite @Johnnie Bob's house Dennis came to me in a dream & asked me what happened? (as he did in 2016 w/the problems then, that is when he gave me,Nathan & All The Way Ray, 3 Stars 4 our Walks ).I told Dennis, "I did not know what happened, but I will cover the miles if I have to do it myself. While I am  Mvskogee (Creek) and Tslagi by blood, my last (best) foster home was a Seneca family from Cattarguas Reservation"

In the Gayanerakowa of the Haudenosuanee/GreatLaw of Peace of the Iroquois Confederacy from which the U.S. Constitution is adapted, giving the world a document never contemplated before (I was Ward of the State when I was less than 1yr old, I grew up in many foster homes & Catholic orphanage.In 1992 my Seneca ma, MaPearl, said"It's time to put down this alcohol"& after I did that, she said "You're one of the Lost Ones, you're coming with us" & brought me into their Longhouse, so I learned those ways) we have a Crossing-Over Ceremony when someone passes & come back a year later & have a MovingOn Ceremony. To me, not finishing the walk is a great dishonoring of Dennis in the year of completing his journey 2 the Spirirt World. I intend to walk w/my backpack from Billings to Leech Lake by mid July when I have a Sundance obligation up there.

The feeling of wrongness is just too great, I cannot live with it. It should be understood this is a Spiritual Walk undertaken for the obligation to honor Nawacomig & his vision @ my own expense for my food, This is not a high profile facebook event with all the amenities fromTribes that accompany Longest Walks.

Anyone thinking to join me should understand these are the conditions I labor under & so will they. I don't know how many times I heard Dennis say "Even if there are only 1 or 2 of us, we will finish the walk! and if I die trying, then It is a good day to die!...."

Beautiful Walking! Just real noisy and traffic at 70 or 80 mph on I-94.  I walk facing traffic and keep my phone off most time when walking between cities.
I do that to save battery but check it several times a day.. Texts work best for me to recieve info.
ADDENDUM: I want to emphasize to be sure I am being clear, this is a TRADITIONAL SPIRITUAL WALK.      What that means to those unfamiliar with this is that things are being done in accordance to the Old Traditional Ways of thinking & doing things, which requires Sacrafice......     There is no money resources for this Walk. Sacrifice is required of all those wishing to join including the $ needed to get here. If you drive a vehicle be prepared to pay for gas. While doing 2014 Ride to Reverse Diabetes (which is when the idea for a War On Drugs came, for Kenny @ Blackfeet Rez in Montana), Dennis, Nathan, me & 2 Japanese women paid equal shares between us whenever we stopped for gas in the RV Aaron (Tsimshian) provided. I suggest that all those riding in any given vehicle do accordingly. If funds show up in excess of what is needed for food then of course it will be shared but I myself have only $ for food (grocery stores, not restaurants).     Traditionally, that means 2 meals per day for those doing the WORK (Walking/Running 20 miles per day EACH) as long as resources last. If things get thin then, Traditionally, it's 1 meal per day with Women, Children & Elders first, everyone else sacraficing equally.
July 10, 2018
I would like to express my deepest appreciation to Julian Rodriguez,Jr. (Pala/Kupa, who's personal financial support eased tremendously the hardships of us all), Mike Shortey (Dine), Carl BadBear Sampson (Paiute/WesternShoshone), & Roy Murphy (Muckleshoot/Seabird) who, as Veteran Longest Walkers, knew the Spiritual obligation to Dennis & the LW5 Walk to cover these miles "...on foot". These Warriors stepped up on short & sudden notice despite obligations to their families, their clans, their Nations  and their loved ones. They suffered much~pains&strains & sweat&sprains, irregular&infrequent showers sometimes wearing the same dirty clothes after getting a shower~  much discomfort generally (probably much similar to the 1978 Walk, I imagine) to cover sometimes more than 20 miles per day each to make this happen. I also want to express my appreciation to The Leonard Peltier Committee members for their support & appreciation to Dennis Banks by allowing us to speak at their anniversary event for Leonard Peltier & to the March for Missing & Murdered Indigenous Women in Rapid City for their embodiment of the ideals the American Indian Movement has always stood for & the good medicine they brought to our Walk. I am absolutely certain that, without the efforts & sacrifices of all of the above to do this Walk in a good way, "The Long Walk to Leech Lake for Nawacomig" could never have arrived in time to join the "Run Around Leech Lake" sponsored by the Banks family & the Tribe to honor Dennis Banks & his life of service to improve the conditions for existence of all Indian Peoples. The debt of gratitude due to them for having helped to heal & complete this Circle cannot be articulated in words so I will only say:
"Miigwich ~ Chi Miigwich".... LEONARD SEABOLT
Sent from my iPhone
As I said in my initial statement, this is a Sacred Spiritual Walk to Honor Nawacomig,  his Vision & his Family, not a high-profile Facebook event hosted by Tribes as in Longest Walks with plenty of time to plan.      Everyone joining this "Long Walk Home to Leech Lake for Nawacomig" will be posting on this website. Facebook link will be on Bea Jackson's website- bealivetraditions.comBea is running point former me on this because she knows Traditional Ways of Medicine & knows how to prioritize properly with regards to Medicine Ways & the ways of the dominant society. She&1 other person will have administrator priveleges

Chick Julian Rodriguez (Pala) & Mike Shorty  joined me a few days ago, een getting the miles in! Rained about 2 pm so doing laundry/chores now. Lakota guy named Cyril Scott(S.R. Chrmn 2012, tried to stop DAPL then) saw us on the road & gave us gift of Sweetgrass & money donation. I took that as a good sign. Again next day another Lakota (Yellow Wolf saw us and gave donation) Busy doing the miles, got two more people on theirway, should get here in afew days & many more trying to free up their schedules to get here. Thats the way it always  is- 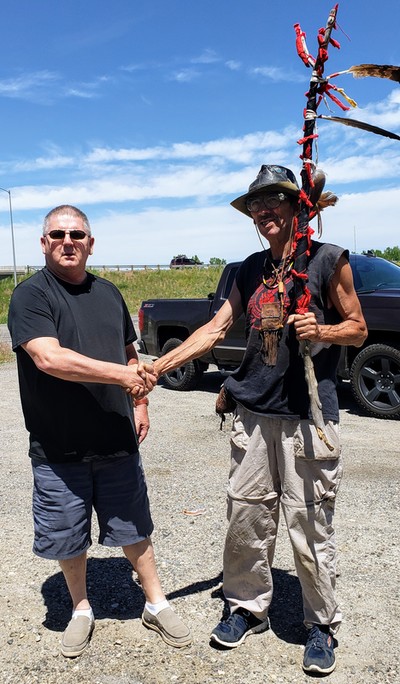 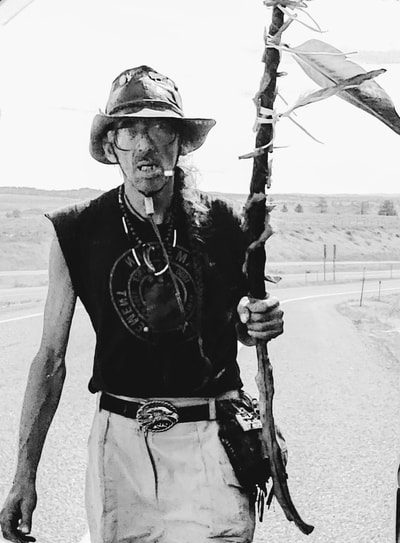 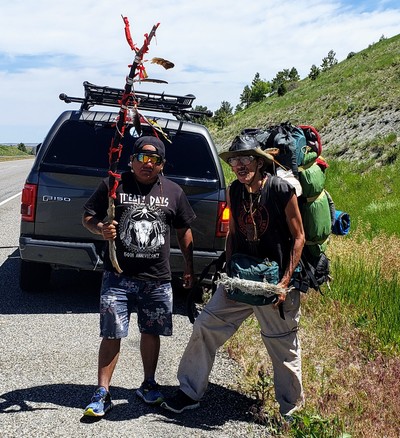 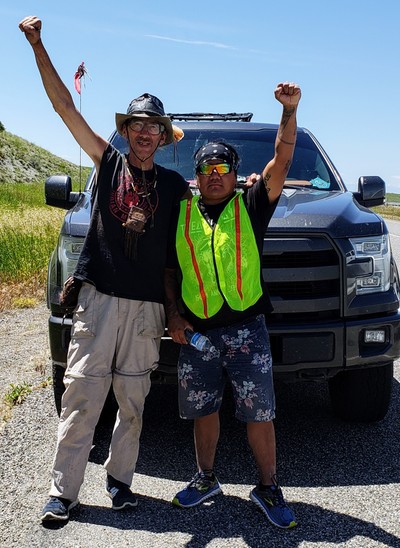 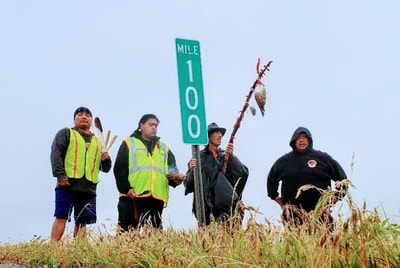 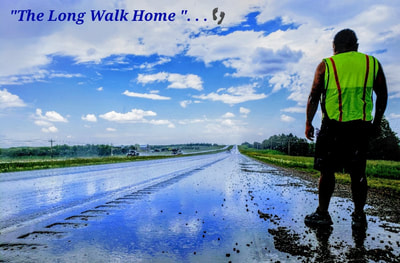 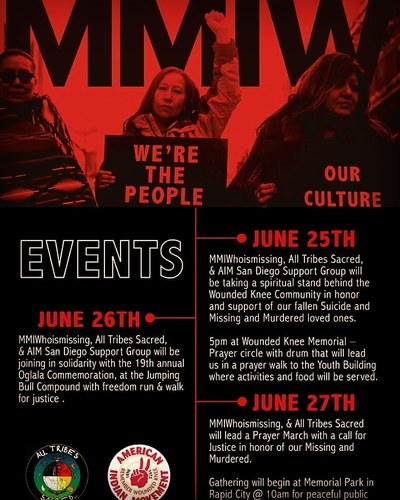 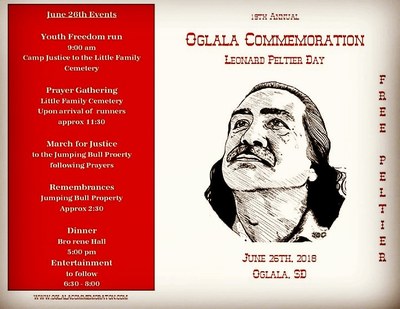 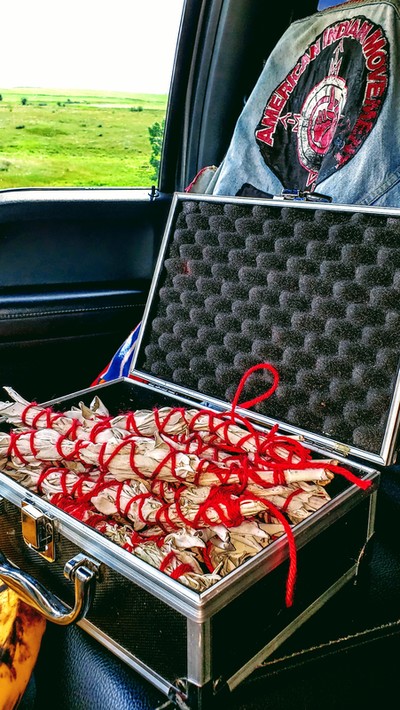 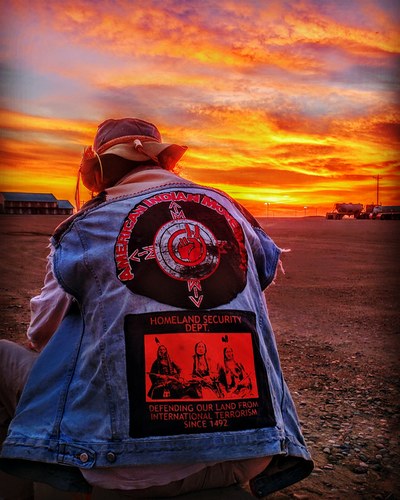